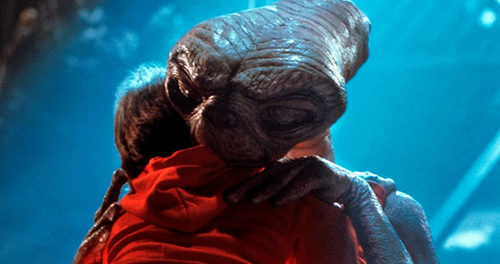 In Steven Spielberg’s blockbuster classic, a young boy named Elliot (Henry Thomas) takes care of a stranded alien, helping him send a message into space for the mother ship to return and rescue him.  E.T. is about loneliness and friendship. While E.T. has been physically left behind, Elliot and his family — Robert MacNaughton and Drew Barrymore play siblings and Dee Wallace plays the Mom — have been emotionally abandoned, coping with the departure of the father. Melissa Mathison’s screenplay spends very little time on this subtext, but it enriches the entire arc of the story.

I’ve never made it through E.T. without crying, and for two reasons. One, and most obviously, it’s a very moving film. I’m a sucker for stories about children conquering adversity without any help from adults, and here they pretty much save the life of our first ambassador from space. One of the first times in the movie when the tears well up is when Peter Coyote’s character, a scientist, tells Elliot, “I’m glad he found you first.” There’s something powerful about the acknowledgement that children are better suited for some challenges than adults. Kids don’t have to be powerless and child characters don’t always have to be puerile or insipid. E.T. takes its child characters very seriously. The result is a drama everyone can relate with, regardless of age.

And the second reason? Brace yourself for cheese. It makes me cry because it reminds me how magical movies can be. Take the climax, for example. You have five children fleeing on bicycles from swarms of government agents. One of the kids has beloved E.T. in his bike’s basket. All they want to do is help E.T. get home, but the children suddenly find themselves fast approaching a police blockade. Rifles are pulled out and aimed at these kids. Cut to a close-up of E.T.’s eyes, knowing full well what he has to do. Cue John Williams and Industrial Light and Magic, who suddenly lift those bicycles off the ground and make them fly. A tremendous moment of exhale becomes a flight of fancy, and then you see those silhouettes soar across the setting sun, one of the most iconic images in movie history. And this is just one moment in E.T.

Henry Thomas gives an Oscar-worthy leading performance as Elliot (other kid actors have won for lesser efforts) and little Drew Barrymore shows raw, natural talent as his younger sister, Gertie (honestly, another Oscar-worthy performance). Allen Daviau’s lush cinematography sets an idyllic tone, while also putting Carlo Rambaldi’s E.T. creature creations in just the right light. It’s hard to believe how real E.T. looks in many of the shots, without any assistance from computer-generated imagery. (You even see the blood pumping through the veins in E.T.’s arms!)

There’s a reason E.T. was the highest-grossing movie of all time, and I hope we haven’t lost whatever it was that made that happen.  I know I haven’t.  And if I ever have my doubts, I can always count on E.T. to restore my faith again. 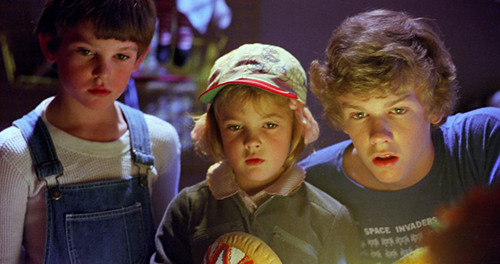