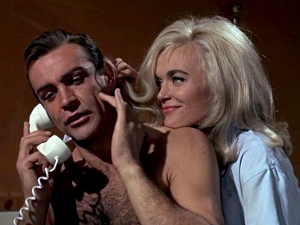 In the third Bond film, agent 007 (Sean Connery) is trying to stop a nefarious gold tycoon from breaking into Fort Knox. Goldfinger is still one of the most popular entries in the franchise because it has everything we’ve come to expect in a Bond flick. Goldfinger himself is the quintessential Bond villain. He knows it’s not enough just to have a wicked plan. You’ve got to have a luxurious high-tech hide out and a laser gun to go with it! The scene where he points that laser between 007’s legs is one of the most famous (and parodied). Equally famous is the girl this time around. Honor Blackman plays Pussy Galore, a mercenary who runs a flying circus. How frickin’ cool is that? You also get Harold Sakata as Oddjob, the dastardly henchman with the lethal bowler hat, and Shirley Bassey belting out what is still the most recognizeable of all Bond theme songs.