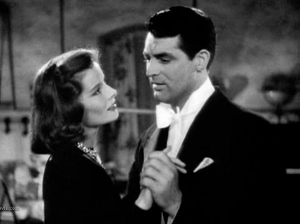 George Cukor directs from the play by Philip Barry (The Philadelphia Story), giving Katharine Hepburn and Cary Grant a chance to shine in this screwball romance. There’s not a Hepburn/Grant pairing I don’t like, and this one comes with a great supporting performance by Lew Ayres as Hepburn’s sobriety-impaired brother. Grant plays a somewhat Bohemian man who falls in love with a rich socialite woman (Doris Nolan), only to realize he shares much more in common with the woman’s non-conformist sister (Hepburn). The centerpiece of the film is a long, charming sequence in which all the characters have an impromptu party in a long-forgotten room full of childhood toys. After they mockingly draw the battle lines between the money grubbers and free spirits, Hepburn’s father unexpectedly intrudes. He attempts to bring reality crashing down around the heathens. I love it when the droll Ayres makes an uncomfortable break for it, muttering, “Please walk, don’t run, to the nearest exit.” The characters work like a charm for me, and it’s unexpectedly moving when Hepburn, having denounced her family on her way out the door to freedom, promises to come back and ‘rescue’ her brother (Ayres). All in all, one of my favorite screwball comedies.