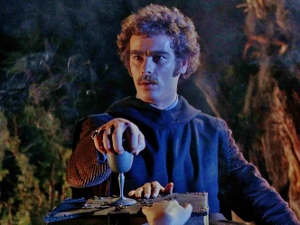 Dean Stockwell and Sandra Dee headline this so-so adaptation of an H.P. Lovecraft story. I gotta say, I’ve yet to see a Lovecraft adaptation I really like. The internalized dread and abstract horror just don’t translate to film very well. Anyway, Stockwell plays an agent of the Old Ones here, Lovecraft’s big squid Gods from another dimension. He’s trying to get his hands on the Necronomicon so he can perform a ritual to bring the Old Ones back to Earth and end the age of humans — the usual agenda with Lovecraft.

Stockwell is suitably off-kilter as a character who isn’t quite human and Dee makes the most of her love interest/damsel-in-distress role. Les Baxter mixes brass and keyboards to create a groovy score that easily my favorite part of the movie. My second favorite part is probably the animated main titles. The rest is a bit of a snooze, overall. The supernatural elements of the story are sadly relegated to point-of-view and negative image photography, along with a few super quick cuts of a many-headed muppet thing. The third act tries desperately to make something out of nothing. The notable supporting cast includes Oscar-winner Ed Begley (Sweet Bird of Youth), Sam Jaffe (Gunga Din), and Rocky‘s Talia Shire (credited here as Talia Coppola). The screenplay was co-written by Curtis Hanson (director of L.A. Confidential, 8 Mile, and Wonder Boys).