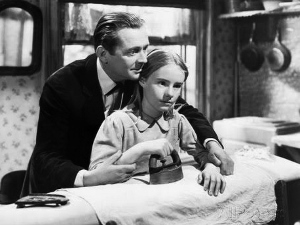 Elia Kazan (East of Eden) made the jump from Broadway plays to feature films with this adaptation of the book by Betty Smith. The story centers around a young girl named Francie growing up in Brooklyn in the early 1900’s. Her father is a dreamer who has trouble providing for the family, while his mother works her fingers to the bone to compensate. The girl is caught in a bit of a loving feud between the two parents — both of whom want nothing but the best for her, but have different philosophies about how to achieve that end. It’s a morality play at heart. There’s some heavy-handed symbolism and a fair share of melodrama, but A Tree Grows in Brooklyn succeeds in creating fully rounded, engaging characters that you really come to care about by the time the third act kicks into gear.

Peggy Ann Garner serves as our window into the story, playing young Francie. She does a fine job, but it’s the grown-up roles that really shine here. Dorothy McGuire (Friendly Persuasion) plays Francie’s beleaguered mother. She gets to show incredible range here, showing simultaneous love and anger for her husband, shame for her flirtatious sister, and bittersweet resolve (some might call it tough love) with Francie. James Dunn took home the Best Supporting Actor Oscar as Francie’s father, and it’s not hard to see why. Dunn fully earns his kudos in a scene where he sings at the piano while ignoring McGuire’s character, trying to put on a happy face for the ever-watchful Francie while fighting back tears of anger and disappointment. Joan Blondell (The Public Enemy) is memorable as McGuire’s sister, Sissy, who’s creating talk all over town for marrying her third husband.