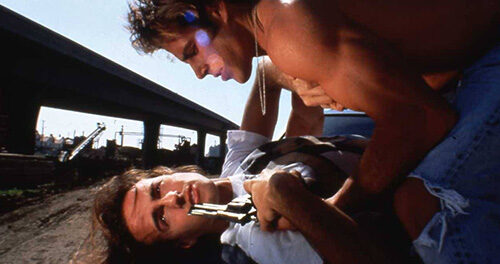 Two HIV positive gay men hit the road together, one fleeing a world he bitterly resents and the other searching his soul about how to carry on after receiving his diagnosis. Billed as “an irresponsible movie by Gregg Araki”, The Living End is a lot of things — savage, absurd, political, comical, sexy, and raw are all adjectives that come to mind. The bizarre combination works, perhaps in part because of Araki’s (Kaboom, Splendor) gleeful defiance of convention — both societal and cinematic.

Craig Gilmore and Mike Dytri play Jon and Luke, the two lead characters who meet serendipitously and quickly foster a friendship out of nothing but their shared status and raging hormones. Jon’s a quiet, reserved writer, while Luke’s a confrontational nihilist fond of saying, ‘fuck the world.’ The actors are serviceable playing conceptual characters that feel like two sides of the same coin — Jon is the good angel, and Luke is the bad demon.

We can easily put ourselves in their shoes, and their duality gives Araki an ability to shift tone furiously, but organically. Jon’s character is anchored in dramatic reality, but through Luke, the film is able to take departures both comic and frightening. Of the lighter moments, my favorite is when Luke is picked up by two bizarre women who plot to murder him after brainstorming a long line of euphemisms for ‘penis’. And of the more serious moments, the movie’s ending packs a hell of a wallop. After Jon and Luke have grown apart, Luke knocks Jon out and decides he knows best how to end their journey together. Sex and violence merge in a climactic moment that would be unforgivable under any other circumstances. But where else can these two men go? Who else can they turn to?

I don’t normally favor films as tonally jumbled or politically pretentious as The Living End (Araki goes so far as to mention a ‘big white house full of Republican Fuckheads’ in the end credits.) But there’s something about the magic of grainy 16mm film that allows me to set aside my preconceived notions about what movies ought to be. 16mm is more real and personal. More experimental. The square aspect ratio of the film, combined with Araki’s proclivity for symmetrical, center-focused composition gives me the impression of a gun target. The Living End is a film that takes aim. It’s a hard film to shake.

When it was released in 1992, there weren’t a lot of gay-themed movies yet, and the ones we had seen were usually very dreary, downer dramas that didn’t celebrate gay people as much as they made them palatable to straight audiences. The Living End was something different. It had hunky leading actors who have sex in the movie — nothing graphic, but suggestion can be so glorious. These characters don’t care what a straight audience thinks of them. They scream, cry and they act dangerously, giving The Living End a raw vitality and ‘fuck you’ attitude that make it impossible to ignore. I admire it tremendously.