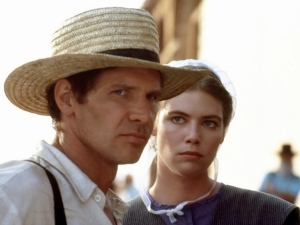 Harrison Ford must hide among the Amish after he discovers corruption within his police department. Witness was an opportunity for Ford to show his acting chops, and it remains one of his best performances. This was the first American film made by Australian director Peter Weir (Picnic at Hanging Rock, Fearless). Weir is probably my favorite director. He balances poetic license with elegant restraint to achieve a kind of cinematic beauty that is distinctly his own. I also love how he uses music in his films, often working with the late Maurice Jarre. In this film, Jarre takes a somewhat anachronistic approach by using synthesizers to depict the austere world of the Amish. It’s not the traditional musical palette, but that helps keep Witness fresh and distinct. Weir is also a master of eliciting powerful performances without the use of dialogue. Just watch how Ford and Kelly McGillis look at each other in this movie — no words could ever possibly convey the desire in their eyes. A gorgeous film directed by someone who truly finds the soul of the piece. With Lukas Haas, Danny Glover, and the first big screen appearance by Viggo Mortensen.