Clint Eastwood stars as his most iconic character, 'Dirty' Harry Callahan, a gruff, no-bullshit San Francisco police investigator on the trail of a psychotic sniper who calls himself 'The Scorpio Killer'. There have been many cat and mouse chase movies over the decades, especially in the paradigm of cop vs criminal, but Dirty Harry left a mark so indelible on the sub-genre, that it remains the measure for comparison over forty years later. 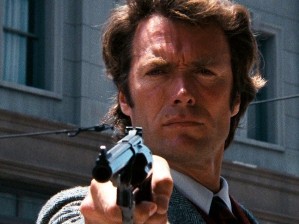 Dirty Harry is a harrowing race against the clock — especially when Scorpio kidnaps a busload of children and buries them in the desert, demanding the city pay a ransom for their return. Eastwood is famously terse and sardonic. It’s easy to take his work in the Dirty Harry movies for granted after so many years of parody in the zeitgeist, but there’s a reason for that: Eastwood is unforgettable here. And he’s pitted against character actor Andrew Robinson (Hellraiser) in the role of Scorpio. Robinson is terrifyingly off-kilter in the role, a genuine mad man.

The film, like many in the ’70s, is about the anti-hero. Dirty Harry doesn’t play by the rules — how do you think he got his name? But he’s the right hero for the right time, because neither does Scorpio. After Scorpio is captured but released due to a minor technicality, Harry goes full-tilt merciless vigilante on Scorpio in a fantastic finale in the middle of an empty football stadium.

Dirty Harry is a hero and a film from a braver time. Watching it today, you have to wonder: just when exactly did Hollywood lose its balls?