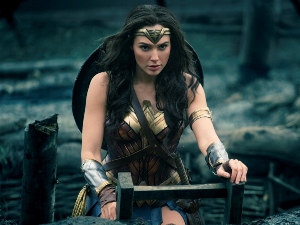 After many failed attempts (here, here, and here) to compete with Marvel by launching their own ‘expanded universe’, DC has finally pulled their shit together. Wonder Woman works. It works as an origin story for the character, it works as a summer blockbuster, and most importantly, it works as an emotionally engaging piece of storytelling.

The story begins on Wonder Woman’s home island, one full of Amazons created by Zeus that is hidden in the middle of the ocean, lost to time as far as human beings might ever know. There we meet the Woman as a girl, young Diana, eager to train with a bad-ass Antiope (Robin Wright, about as far from The Princess Bride as she could ever be). But her mother (Connie Nielsen) doesn’t want her to know anything about war or battle. When Chris Pine’s character crashes on their island, bringing with him all the horrors of the first world war, Diana must decide whether to make her mother happy, or follow her sense of duty to help Pine fight the Germans. We’re then treated to a wonderful segment featuring Diana as a fish out of water, escorted by Pine through London as he rallies the military to his cause. Diana is impatient with pre-women’s suffrage society and itching to be dropped off at the front lines. Soon enough they are there, and Wonder Woman lets the world know what she’s capable of. The rest of the movie is paint-by-numbers compared to the first half — the bad guy is as generic as any we’ve seen before, but at least the CGI mayhem is kept to a minimum here. It’s as though director Patty Jenkins knows that stuff is dull as dishwater and refrained from indulging in it (I hope that’s why).

Gal Gadot is wonderful as Wonder Woman. We already knew she was the best part of Batman v Superman. This movie dances circles around that one on the strength of hers and Pine’s characters, their beautifully understated relationship, and a screenplay (and score, for that matter) that aren’t afraid of (GASP!) human emotions! I cried at Wonder Woman, and I’m not ashamed to admit it.

I especially want to commend Jenkins, the Snyders (who produced here), and everyone else responsible for the storytelling for making a film that reminds us what superheroes are good for. Wonder Woman is depicted as a noble character who fights to change the world for the better. She is more compassionate and emotional than her male counterparts, but these qualities only strengthened my identification with the character and my engagement with the movie. Other films use Nazis and genocide as backdrops for their supernatural storytelling, but this Wonder Woman movie doesn’t take these elements for granted. We’re shown the devastation of war. The complexity of it is central to Diana’s character transformation. The film aims toward an ending that will make it impossible for Diana ever to forget the costs of war. Fighting for peace is what she commits her life to.

I wish we lived in a world where we didn’t need a big summer movie to remind us that war is bad and love is good. But here we are, with Wonder Woman reminding us that good and evil are together in all of us, and the big comic book battles are played out in the decisions we make every day.

‘Wonder Woman’ is essentially the story behind this photo.